Jordan Girardin is a historian of late modern Europe, specialising in the history of travel, mobility, and perceptions of the Alps around 1800. He is a graduate of SciencesPo (Lyon) and completed his MLitt in Modern History at St Andrews in 2012. He graduated with a PhD degree from St Andrews in 2016. Twitter @JordanGirardin

A ‘hopeful’ language in a ‘friendly place’: actors and networks of Esperanto in Western Europe (Postdoctoral Researcher 2018-2019 funded by the DAAD / German Academic Exchange Service and the Esperantic Studies Foundation, hosted by the Institute for European History, Mainz)

The ambition of this project is to understand the particular reasons why Esperanto failed in its place of origin, yet succeeded in particular regions across western Europe and thus became a transnational phenomenon in its own right. Why, is the ultimate research question, did Esperanto flourish in specific areas of western Europe? In particular in an area driven by national enmity between France and Germany. Who were the activists in this community of convinced speakers and dedicated supporters of a neutral language? The project investigates the background, origins, beliefs, and actions of those who joined Esperantist societies, learned and promoted that language, and will also focus on certain key actors through prosopographical research. 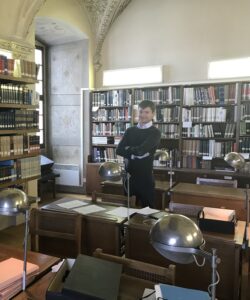 It is the underlying working hypothesis that Esperanto was driven by a civil society of like-minded internationalists who supported cross-border and transnational cooperation during a phase of rising international tension during the two decades prior to the First World War. Key of the prosopographical analysis will be to link the Esperanto enthusiasts to other transnational projects and societies (academic, social, political, scientific).

The project seeks to make a contribution to the emerging field of late nineteenth-century internationalism (NGOs, World Fairs, humanitarian aid, Red Cross) prior to the more formal turn to internationalism (in the form of the League of Nations and later the UN). The project will attempt to map the different spatial and social territories where Esperanto found key support, and will seek to find which geographical spaces and regions (the Rhineland, Western Europe) witnessed and facilitated that phenomenon. Finally, the project will focus on the case of Neutral Moresnet through an analysis of its unique spatial setting, and the involvement of Dr Wilhelm Molly in the debate around Neutral Moresnet’s adoption of Esperanto as official language. A dedicated research trip to the region will seek to offer an in-depth analysis of this particular case that embodies the peak of the Esperanto movement in the late 1900s.

Nina Walter completed her MSt (Res) degree with the School of History at St Andrews in 2019-20. Historical research into the early stages of the Esperanto movement in Europe perfectly combines Nina’s interests in culture, history, and languages. She is a qualified English Language Teacher, who has lived and worked in four different countries: Poland, UAE, Oman, and UK.

Between Nations and Empires. Esperanto in Poland, 187-1939

The thesis investigates the various roles Esperanto played in pre-1939 Poland and examined different attitudes surrounding this new, Warsaw-born language at its peak. Contrary to the existing research, which tends to stress the cosmopolitan aspect of the Esperanto movement, the thesis argues that Esperanto in Poland was not necessarily a path to a-national unity, but rather a platform to celebrate and promote Polishness on an international stage.